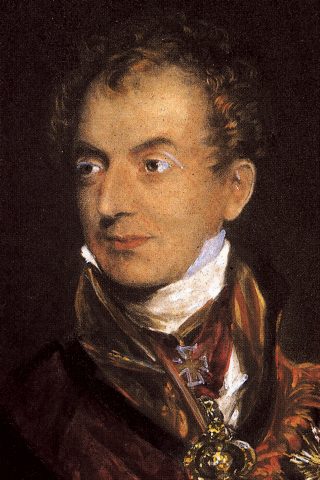 The fraudulently obtained peace treaty (October 1809) between France and Austria had already divided the country, requiring large areas to be forfeited, and access to the sea to be relinquished. She had also been compelled to give up all trade with England.

But at least this undesirable treaty had allowed the Austrian Emperor to return to Vienna on the 26th November, and Metternich to take office as Minister of State and do what he had been planning: “…from the day of the signing of the peace treaty our strategy must be solely to resist, connive, evade, and cajole. Only thus will we succeed in surviving until the day of the very probably universal liberation.”

On the 28th November – ie two days after his arrival at the Ballhausplatz – he summoned Count Alexandre de Laborde to his office. The latter was the son of a great financier, a member of the national government in Vienna, and acting as commissioner for the regulation of certain financial interests dependent on the recently implemented peace treaty. Metternich put forward the possibility of a marriage between the French Emperor and an Archduchess: “The idea is my own, I have not yet sought the views of the Emperor on this matter, but I am almost certain that he will look favourably on the scheme”, he said.

When Metternich then learned from de Laborde that Napoleon would consent provided acceptance of his proposal was guaranteed (clearly the two Russian “flops” had not gone down well with the French ruler), and that the way was clear in Paris, he wrote to his master on the 7th February 1810, “The marriage scheme will undoubtedly develop to our benefit.” Ultimately his “idea” not only had the desired effect, but also proved popular with the entire landowning class when the news spread like wildfire. It even saw Austrian government securities rise by 30% on the stock exchange.

The 1st April 1810 was no matter for joking, but the day of the civil ceremony, with – who would have thought it – the religious service in the Louvre the next day. In the Louvre because the Pope had not given Napoleon his consent and for this reason he wished to avoid a wedding in Notre Dame. The elders of the Roman Catholic religion opposed a church wedding between the Archduchess and a divorced man.

Just as in the case of Marie-Louise (who was called Marie Ludovica before her marriage), the Emperor Franz I (II) did not dare oppose the all-powerful Chancellor when it came to Leopoldine. In 1816 Metternich suggested the marriage of his daughter to the heir to the throne of Portugal, Brazil, and Algarde – and, of course, as with Marie-Louise this was for political as well as personal considerations. The following is the background to the situation.

In 1807 the Portuguese court had decamped in its entirety to Brazil. Napoleon occupied Portugal, but himself abandoned it later. The neighbouring English took advantage of the situation, seducing the Portuguese people with their liberal policies. For this reason the Portuguese king, João VI, was interested in a closer liaison with the houses of Habsburg and Braganza, which promised greater security against Great Britain. To be continued…