Taxonomic note: Symphysodon haraldi (blue or brown discus) was firstly described by Schultz in 1960 as a subspecies under the name of Symphysodon aequifasciata haraldi and it was commonly known as blue discus for long time. It was elevated to species level Symphysodon haraldi by Géry and Bleher (2004). After a recent revision based on molecular investigations (Bleher et al., 2007), it has been placed in synonymy with the subspecies S. aequifasciata axelrodi (brown discus) and the species name validated by Géry and Bleher (2004) has been finally confirmed.

Description: Symphysodon haraldi shows the greatest range of colours and colour patterns among the three Symphysodon species, probably because of its wide range of distribution and its adaptation to mostly clear water habitats. The species may have eight, nine, 10, or more bars, in some cases up to 15 or 16 (a feature never recorded in either of the two other species). The bars may be of equal width or some are very narrow. One or more bars may be wider in their central part. Specimens with such a pattern can be found throughout the species’ distributional range, even though they are rare. In some specimens only the fifth, sixth, seventh and ninth bars are widened centrally, or the fifth to ninth bar. Some specimens have white bars or no visible bars at all. Some specimens of S. haraldi have no stripe pattern, or only very few stripes, but stripes are always present on anal-fin rays. There is a series of stripes on the forehead region and/or on the lower ventral. Fractions of stripes may be dispersed over the entire body or half the body, a pattern which in the aquarium fish hobby is called “semi-royal blue”. Some specimens (mostly alpha
animals) have stripes over their entire flanks, which aquarists call “royal blue”. In some rare cases they may even form strait horizontal lines, but most S. haraldi have irregular or wavy stripes. In various locations some individuals may have only fragmented stripes and/or a pattern, which looks like series of pearls known as “pearl discus” in the
ornamental fish hobby. In other cases, a pattern of very fine stripes may be found (called “snakeskin” in the ornamental fish trade) and in some specimens the stripes may even run vertically. The base colour ranges from grey to yellowish, to pure yellow, but no individual of this species has the striking colour pattern of the other two species. Individuals of S. haraldi of completely different appearance and origin readily interbreed, an other reason why new variants are continuously being discovered, often in the same biotope. All the variants above described are illustrated in the Bleher’s Discus book (2006).

Distribution: Symphysodon haraldi is generally restricted to clear water lakes and rivers and its “blue” and “brown” colour variants are found syntopically almost everywhere throughout their range of distribution. They also commonly interbreed.

Symphysodon haraldi has the largest distribution area of the three species, which is almost continuous. It is found from the extreme east of the Amazon basin (in the Tocantins) to across the border with Colombia and Peru in the west, and to the north as far as the Apaporis. Throughout this area the various colour forms are mixed at random.

In the western Amazon, north of Rio Solimões, its distribution area ends north of Tabatinga, which is north of Calderón. In the Igarapé Tacaná, Igarapé do Belém and along the lower Rio Içá Region it occurs in lagos and igapós. Towards the east it is found in the northern Solimões Region from Lake Piorini all the way to Manacapuru. This area of distribution is interrupted by black water of Rio Negro and the Urubu. Symphysodon haraldi is then again found at the mouth of the Urubu, in Lago Saracá and Lago Canaraçí, all the way east to Lago Grande de Monte Alegre, where its distribution area reaches the northern Rio Amazon Region.

It does not occur in the extremely acid waters of the Rio Jatapu and Rio Nhamundá Regions, where only S. discus is found. South of the Amazon, its easternmost distribution is in Rio Tocantins (and not in Belém, contrary to what is written on the labels of some museum specimens and elsewhere; no discus was ever found east of the Tocantins). S. haraldi is found in most parts of the southern Rio Amazonas and Rio Solimões, in clear water tributaries and lake regions, all the way to Rio Grande Coari in the west, but not in the white water rivers, such as Rio Purus or Rio Madeira (any such data in the literature is erroneous). Not even for a few hours would they survive in those sediment-loaded, turbid, white waters. Symphysodon haraldi is also absent from the extreme black waters of Rio Abacaxís and Marimari (which are confined to S. discus).

It is absent from the Rio Negro system, except for specimens collected in the Lago Cueru (also spelled Cureru), a clear water lake, which lies to the left of the Rio Branco mouth region. In most of these locations brown specimens, intensely coloured ones and all intermediate stages occur syntopically.

Discus are generally calm, peaceful fish, but as cichlids they can be aggressive towards one another, especially when attempting to pair off and spawn. Therefore, for successful breeding, it is necessary to isolate the pair in another aquarium.

Through direct observation in the natural environment and stomach contents analysis in laboratory, it was understood that discus were mainly carnivorous and that their diet is composed mainly of prey items such as planktonic organisms and fish larvae. Nevertheless, during the dry season, when prey is scarce, they can feed on organic and vegetal matters they find in the environment.

Aquarium reserved exclusively to breeding pairs with a volume of 120 litres or more. Biological filtration with weak water movement is suggested. A light or absent sandy bottom, a broad-leaved aquatic plant (e.g. large Echinodorus) and/or wood would be good substrates for spawning. Artificial substrates such as an upside-down terracotta pot are also suitable.

They should be fed with live or frozen food such as bloodworms and/or Artemia shrimps, alternating with dry granulated food.

In this species, as in other cichlids, pairs are produced naturally within the adult group. Before spawning, and this may be days or weeks before, the couple will choose a vertical or inclined surface for their spawning site. It can be the large leaf of a plant, a wood or the aquarium glass. The site is carefully cleaned as both fishes peck at “invisible” dirt on the surface.

When the time to spawn comes, the female positions her vent against the cleaned surface and begings to lay her eggs. Then, the male follows immediately behind and fertilizes each batch of eggs. The sequence described is repeated several times until all the eggs have been laid.

Breeding habits
Substrate-spawning
Hatching period
About 60 hours, depending on the water temperature. Usually spawning starts in the late afternoon and the eggs hatch at dawn on the third day.
Number of eggs in average
up to 400
Parental care
Yes
Fry number
Variable, depending on various factors such as water quality, fertility rate and the experience of the couple.
Nutrition fry

The initial phase of feeding the larvae hinges on the consumption of the yolk sack. After a few days, the larvae leave the substrate and start swimming. They immediately move to their parents sides to feed.

In fact, free-swimming larvae bite on skin mucus of their parents for energy growth and development during the first month after hatching. The fry grow quickly and within a few weeks they are ready to take newly hatched brine shrimp.

The above scenario is the ideal one. Unfortunately, there are many variables that often affect breeding attempts, especially when breeding wild specimens. Do not become discouraged when fish fail repeatedly to produce vital fry. 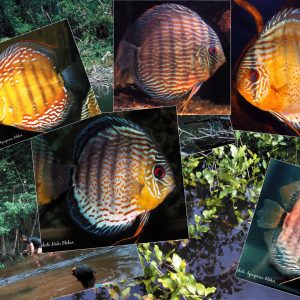 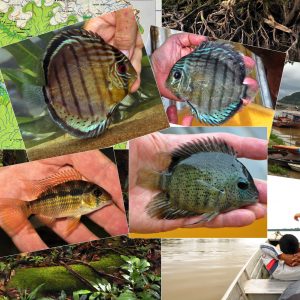 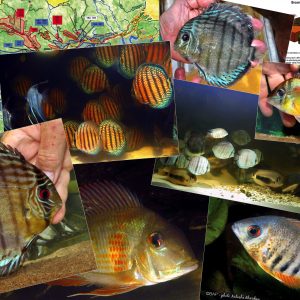 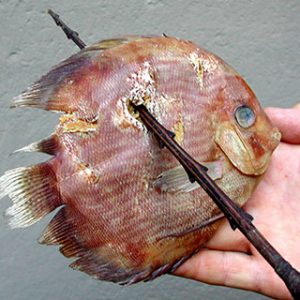 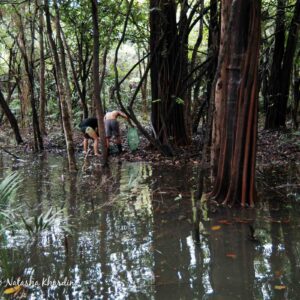 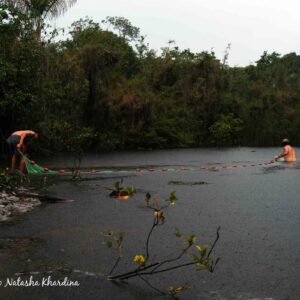